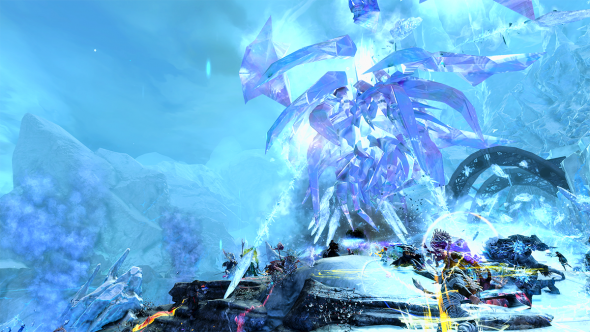 Bryan Yarrow and Nick Hernandez here! We wanted to give y’all a little peek into the development of the Assault on the Frost Citadel meta-event and everything going through our heads during the planning process. First, we’ll start with Nick telling us a little about the Citadel Siege! 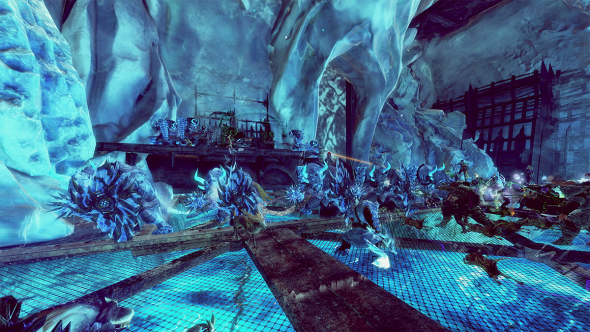 Nick Hernandez:
Hey y’all! For this release, we wanted the final portion of the meta to draw from all elements of Drizzlewood Coast—like “No Quarter’s” push-and-pull and some newer mechanics on the northern side that are coming with “Jormag Rising“—to create the feeling of one final, epic siege. In this one, you’re playing for all the marbles! We’ve tried to make players feel like they’re following commanders in a continuation of the World vs. World–like setting by taking steps to gain ground against their enemies.

By utilizing mechanics such as capturing areas, building long-distance siege weapons, adapting to on-the-fly plan changes, and playing some good old-fashioned “player vs. door,” we hope to strike a balance between that cooperative war feeling and the fun of bashing on some AI baddies, with all of it culminating in one ultimate goal: crashing their party.

Once players finally break into the citadel, they might notice a change of pace. In the citadel itself, we want to play with making it feel more like an instanced encounter. In WvW, keeps are mostly about breaking in and killing the keep lord. However, since this is supposed to be the Frost Legion’s newly built HQ, we added some layers of complexity and personality to the encounters. And of course, all of this had to be done while not blowing out the scope of the meta.

Going with this instance-style planning and thought process afforded us a lot of benefits. One example was that controlling the layout of the encounters allowed us to gain a greater understanding of where the player “blob” was going to be at any given time. This also freed us up to play with camera angling and create some nice cinematic moments. Finally, we had an opportunity to innovate a bit with player roles. This provided a nice foundation to create some fun content, which diversifies what players can do during each encounter. I like giving options, and hopefully that shows in the end product.

Additionally, we wanted to take some time to figure out how to best end the siege. The citadel itself isn’t the true finale. Throughout the entire siege, there’ve been hints at a looming threat soaring through the skies: a Claw of Jormag. Within the citadel, you deal a massive blow to the Frost Legion and damage their ranks. But you’ll need to take down the Claw itself to solidify the blow you strike to Jormag’s army. We did our best to blend the citadel parts into this finale with an increasing Claw presence until you finally face off with it. When you do, you’ll be met with one tough opponent.

Now here to talk about the magic of said finale is Bryan Yarrow, the designer of the Claw fights! 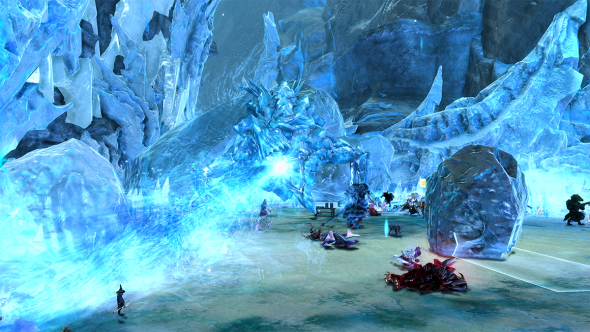 Bryan Yarrow:
Thanks, Nick! So, after that grueling assault on the Frost Citadel, the players encounter one final challenge: the Claw of Jormag, a familiar face that serves directly under Jormag. With this Claw, we set out to create some unique mechanics and memorable moments for the encounter to highlight how this isn’t the same Claw that you might have seen before, as well as emphasizing how it’s one thing to fight a dragon’s army…and another entirely to fight the dragon itself!

This battle begins as players exit the citadel and find the Claw perched on a spire of ice far out of reach. The only way to attack the Claw is for the players to repair several cannons around the perimeter of the roost. To do this, players must gather scrap dropped off by allied supply-runner copters and bring it to the cannons, all while dodging the Claw’s freezing onslaught.

This part of the encounter was difficult to get locked down—we wanted to make the players feel like they had to work together in order to bring the Claw down off of its perch, but we didn’t want things to take so much effort that players would get annoyed that they couldn’t just go up and attack it. To accomplish this, we made a lot of adjustments during development to the amount of time it should take to repair the cannons. This helped us hit the sweet spot where success would feel earned but not frustrating.

After succeeding in the first half of the battle, the players get to watch with satisfaction as the cannons score a direct hit on the perched Claw, throwing it against a nearby cliff wall and sending it crashing down to a plateau below—injured, but not defeated.

With the Claw half-buried beneath icy rubble, the players can now engage it directly. Here, the Claw will unleash its most powerful attacks, with skills that blast out icy breath that can’t be dodged or summon gale-force winds. Players must hide behind huge boulders scattered around the area to avoid the attacks and stay alive.

This part of the encounter was designed around a single core idea: the Claw’s signature attack was to blow players off the cliff. In development, this was a tricky tightrope to walk because the goal was to make players feel like they could get blown off the cliff while also making sure that everyone wasn’t getting thrown off constantly. This balance was especially important for players who were new to the encounter. The mechanic of sheltering behind boulders to avoid being blown away ended up being a big part of our solution to that problem. It created an interesting cadence in which players would need to expose themselves to lay on the damage, then retreat to safety to survive.

The Claw of Jormag encounter was a lot of fun to create, and while unique boss mechanics are time-consuming to put together and balance, we knew that they were necessary in order to give the players the feeling of an epic conclusion to the Assault on the Frost Citadel. Of course, not everything that the Claw does is covered here, so keep your eyes open for a few more surprises when you meet it in game!